Six qualities you need to be an inspirational modern leader

SIX QUALITIES YOU NEED TO BE AN INSPIRATIONAL MODERN LEADER

Modern business challenges can require new approaches. Successful leaders across many different levels of seniority will need to evolve their skills in order to guide organisations into the future. But what does a modern leader look like and how can organisations develop them?

Many studies draw parallels between strong leadership and solid organisational performance. But whether they’re a junior manager or a senior executive, the qualities that leaders need are changing. Traditional, coveted leadership skills must be coupled with new abilities in today’s rapidly evolving and unpredictable world. So, what does an effective modern leader look like?

A global study by McKinsey & Company found that more than 90 per cent of CEOs planned to boost their spend on leadership development, rating it as the most crucial human-capital issue their organisation faced. The report also found that leadership strength explains about 80 per cent of the variance in organisations’ ability to sustain long-term performance. Yet McKinsey also reports that more than half of companies are not confident their leadership development will yield positive results.

1. Remember what truly makes a leader

Before looking at what new skills leaders might need to take an organisation into the future, it is perhaps worth reflecting on what a leader actually is. Unfortunately, being put in charge of colleagues does not necessarily make you a ‘leader’.

In a speech at Harvard University, Facebook COO Sheryl Sandberg said, “Leadership is about making others better as a result of your presence and making sure that impact lasts in your absence.”

Meanwhile, retired astronaut Chris Hadfield (most famous for his rendition of David Bowie’s Space Odyssey recorded on the International Space Station) believes that leadership is “not about glorious crowning acts”.

“It’s about keeping your team focused on a goal and motivated to do their best to achieve it, especially when the stakes are high and the consequences really matter,” he said in his book An Astronaut’s Guide to Life on Earth.

While there are many other opinions out there, the common thread seems to be that a true leader allows other people to do their job better. But what traits are needed to achieve this in the modern workplace?

2. Use blended leadership styles for a VUCA world

Stacey Philpot, Human Capital Principal at Deloitte Consulting in the US, says the core skills that were historically most needed in leaders have not changed, based on psychological assessments of 23,000 senior leaders globally over the past 25 years.

These skills include pattern recognition, motivation, agility and emotional intelligence, or the ability to understand, control and express emotions.

“These skills allow someone to become a leader faster than their peers, even in today’s volatile, uncertain, complex and ambiguous (VUCA) environment,” she says.

However, leaders need new styles of leadership to deal with changing cultures, says John Rocco, Vice President of Marketing, Canadian Banking at Scotiabank in Toronto. “Being comfortable with not having the answer, owning failure and drawing lessons from it, can create an environment of trust and openness that creates innovation,” he says, adding that these behaviours may engage employees too.

Collectively, these behaviours form “servant leadership”, where leaders create the conditions for teams to excel by displaying empathy and vulnerability – traits that Rocco says were once perceived as weaknesses. This is a marked shift from the authoritative, ‘command-and-control’ leadership style that once prevailed, he says.

But given the stigma around servant leadership, how can it be encouraged in organisations? Alsu Polyakova, HR Leader for RCIS, GE Healthcare, says the key is frequent performance appraisals for leaders, where behaviours are decoded and encouraged. “We give leaders lots of opportunities for self-reflection, so they understand how they behave,” she says.

Once an organisation has a clear set of values that are understood by everyone (this can be made clear through 360-degree feedback assessments), leadership can be scaled. Rocco says this should be done from the top down. “The most senior leaders must demonstrate leadership behaviours that are aligned to those values. If leaders walk the talk and create the conditions for those leadership values to flourish, the propensity for others across all levels to model that behaviour increases dramatically.”

He adds that behaviours that are contrary to those leadership values become more visible and, ideally, are not tolerated. “This effectively snuffs out the oxygen that breeds bad leadership,” he says.

3. Build a culture of trust

Gaining workers’ trust is more important than ever, says Nadezhda Kokoliya, Bayer’s Head of Talent Acquisition for Russia and the Commonwealth of Independent States (CIS). That’s because employees increasingly expect leaders to take action on societal issues like climate change, she says, and doing that is one way to build trust. In fact, 71 per cent of employees believe it’s critically important for their CEOs to do this, according to the 2019 Edelman Trust Barometer.

Doing so may yield rich rewards. The Edelman poll shows that workers who trust their employers – a trust that is earned, in part, by leaders addressing societal challenges – are far more engaged and remain more loyal than their more sceptical peers. “If employees don’t trust you, they won’t follow you,” agrees Kokoliya, who measures trust through regional workforce surveys. “But employees are questioning management decisions more so than in the past because they are more informed by the proliferation of information online.”

While leadership styles are clearly changing, the most effective leaders tailor their styles to suit different scenarios, says Professor Sattar Bawany, CEO of the Centre for Executive Education in Singapore. “Leaders need a broad repertoire of management styles and the wisdom to know when each style should be used,” he says. “In crisis scenarios like cybersecurity breaches, for example, leadership should be authoritarian because the scenario is unstructured.”

Managers must also balance leadership styles to suit different generations. Modern workplaces will soon house up to five generations under one roof – Baby Boomers, Gen X, Millennials, Gen Z and Gen I – many with differing preferences for how they wish to be led, according to Lindsey Pollak, author of The Remix: How to lead and succeed in the multigenerational workplace.

She believes modern leaders must mix old and new leadership styles that better suit younger generations. That’s because millennials (20-somethings), for example, are forecast to account for three-quarters of all workers in the US by 2030.

Therefore, engaging them is crucial to good organisational performance, but leaders will need to tweak their styles to do that. For instance, Pollak says millennials want more transparency in how leaders communicate with them than older workers because they have grown up with social media.

“Twenty years ago, everything in organisations was on a ‘need-to-know’ basis,” she says. “With millennials, you need to be more explicit in giving instruction and explaining why, to keep them engaged.”

With the workplace evolving so rapidly, leaders cannot rely on past experience alone to get by, says Norm Smallwood, who co-founded The RBL Group, a leadership consultancy. “Being exposed to many situations means you may be able to deal with future uncertainty, because you have developed resilience,” he acknowledges. “But many leaders are siloed, running one function.”

For this reason, he says organisations should look for leaders who understand the future better, as well as those with a wealth of experience. “Success comes from the ability to combine understanding of exciting, new trends with the experience required to put that knowledge into action,” says Farmer.

But what is the right balance of prescience and retrospection? Farmer says: “Ultimately, there’s no one-size-fits-all approach when balancing experience with adaptability, which depends on the organisation and the sector it operates in.”

For example, experience is less important in rapidly evolving industries such as manufacturing (because of robotics), as prior knowledge may quickly become stale, says Bawany.

6. Be aware of cultural differences

Organisational culture is an important factor too, he says. Risk-averse firms, for instance, may prefer experience over novel thinking, fearful of a backlash from stakeholders should the latter fail.

To mitigate this risk, companies should look for leaders who also make decisions based on scientific evidence as well as gut feeling. That’s according to Omid Shiraji, a Consultant Chief Information Officer for a London council.

“Leaders need to use increasingly available data to inform their decisions, but they should always use intuition to augment the data,” he says. This can mean certifying the evidence based on decisions they’ve previously made, Shiraji says. “We still need human leaders in a technology-driven world.”

But above all, says Kumar, leaders should recognise that today’s reality may be old news tomorrow. “The winners will be leaders who are proactively shaping things while also quickly adapting to doing things differently,” he concludes. 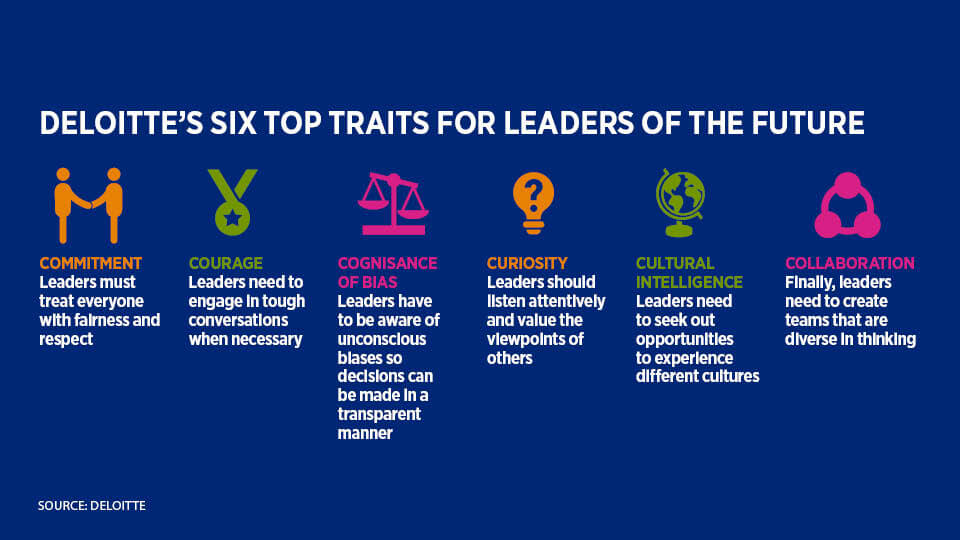 She has a long-standing passion for the role that leadership and cultural development play in shaping organisational and human success.

Born and bred in New Zealand, Sandra has worked for Hays for the past 20 years, originally in Australia where her last role was as HR Director for the Asia Pacific region. She moved to London in 2012 to take up a role in the UK&I and was promoted to the Group Management Board in 2017.